Road construction workers work together to quickly shovel asphalt into a loaders bucket on a road renewal project.

Road construction workers work together to quickly shovel asphalt into a loaders bucket on a road renewal project.

Rome wasn't built in a day. A trite expression, perhaps, but one which might comfort builders and other construction sector service and material providers wondering when infrastructure money the federal Liberal government promised in its two most recent budgets might flow meaningfully down the proverbial pipe.

The 2016 budget announced more than $120 billion in infrastructure investments over 10 years. This included $60 billion in new funding for public transit, green and social infrastructure. The 2017 budget upped the federal commitment to more than $180 billion and realigned this over 12 years. Under the previous Conservative government, Build Canada poured money into an array of projects. The intent was to stimulate the economy, and the projects were largely ‘shovel-ready' sewers, roads and bridges.

However, while economic conditions have improved somewhat, the Liberal government's Investing in Canada Plan seems more gradually paced rather than opening any kind of floodgate. The Liberal plan was split into two phases. The first, announced in Budget 2016, included investments of more than $11 billion in public transit, green, and social infrastructure. The delivery of funds was a shared responsibility across multiple departments, with Infrastructure Canada the lead department for funding that focused on the rehabilitation and recapitalization of existing infrastructure such as sewer, water, and public transit projects.

Michael Atkinson, president of the Canadian Construction Association, says the new infrastructure program seems a little slower out the gate than anticipated. Expressing confidence that the train remains on track even if moving less quickly than industry might want. Atkinson

acknowledges a process whereby often-complex infrastructure must pass through detailed bureaucratic channels before crews can break ground on individual projects. “The federal government announced the (2016) program in two phases,” Atkinson explains. “The first phase was the smaller-type repair projects that were ready to go.” He adds that work has already begun on some projects, while others are undergoing planning and negotiation.

Atkinson points to Saskatchewan to illustrate how long it can take to unleash federal infrastructure dollars. The Prairie province was among the first mid-tier governments to finalize its 2016 framework agreement with the federal government, and this only happened last September. Infrastructure Canada's online tracking tool provides a window on all this, so the public can see a list of approved projects and where individual projects stand <www.infrastructure.gc.ca/pt-sp/index-eng.html>.

New framework agreements were needed because the infrastructure program enacted by the Liberals differs substantially from those under Build Canada. “What's taken so long is the provinces,” Atkinson says. “It hasn't been easy to get their signature on a piece of paper. And then, after the framework agreements have been signed, the provinces have to send the feds a list of proposed projects for funding. But — guess what — those lists don't always happen according to clockwork.”

Last October, several southwestern Ontario municipalities proposed wastewater projects. After several months passed, without any word of progress, the municipalities became frustrated, thinking the federal government was holding things up. “Some of them approached us because they hadn't heard a thing,” Atkinson says. “We contacted the feds in April and they told us they had just got the list in March. The province had been sitting on 1,000 water and sewer-type projects.”

Atkinson is sympathetic, quick to acknowledge the complexity of what's going on. “You've got three governments involved on many of these projects,” he says. “People have to understand the process. The initial approval by the federal government is just that — initial approval. They've agreed to fund a project at whatever their percentage is. But they don't call the tender. If it's a municipal project, the municipality determines when the project's going to proceed. So if there's blame or concern around how long it takes for stuff to get going, it's not just at the federal level.”

In fact, Atkinson says he's thrilled with the current federal government's commitment to infrastructure, which significantly exceeds Build Canada dollars. “When the stimulus program came in back under the Conservatives, these were so-called shovel-ready projects. A lot of them were already designed and sitting on the shelf, and they were expedited. So I think we got spoiled and expect government to be able to act that quickly all the time. People don't understand that on these cost-share projects the feds don't pay anything until a project's underway and the bills are coming in.”

The federal government must sign new integrated bilateral agreements with the respective provincial and territorial governments, as it did with Phase 1 funding, which lay out the details of the programs. The Minister of Infrastructure and Communities, Amarjeet Sohi, recently sent letters to the provinces and territories to establish the next steps and launch negotiations for these programs. These letters can be seen at <www.infrastructure.gc.ca/plan/about-invest-apropos-eng.html#letters>.

While shovels are hitting the ground across Canada, the pace varies by region and niche of infrastructure. “We're seeing a huge increase in the number of water and sewer projects in municipalities,” says Tom McGinn, executive director of the New Brunswick Road Builders and Heavy Construction Association. “Even smaller towns and villages are doing projects that we've never seen, in my recent memory anyway, and they're a result of the federal money.”

Even where there are delays, McGinn expresses optimism. Provincial Route 11, along the Northumberland Strait, is an example, with construction not expected to kick in until next year. “The province didn't have the project designed and ready to go, but it is now, and we're hearing that a couple of the tenders might even be called by late summer or early fall.” A route along the Bay of Fundy, designed to link otherwise unconnected roads, is also on tap for 2018. “It's going to be a huge boost for the tourism in that area. From what we're hearing, the next three to four years in our province is going to be good,” McGinn says.

One thing that always worries McGinn is change of government, a route New Brunswick travelled following the 2010 provincial election. “A new government came in and just stopped everything,” McGinn said. “One of the main points we make with government and the Department of Transportation is to try to level out the funding so we don't have these peaks and valleys. So we don't have a $500 million capital budget and then there's a change of government and all of a sudden it goes down to $100 million. It's hard on contractors because they ramp up for busy seasons and are left with a bunch of equipment they can't use and employees they don't need.”

As director of trade and investment with the Canada West Foundation, Carlo Dade has his eye on trade infrastructure, which includes ports, airports, rail and highways. “Everything you think of to move goods and services to market,” he says. Trade infrastructure projects enhance or facilitate the movement of goods and can include interchange upgrades and grade separations, which facilitate the coexistence of rail and vehicular traffic. Dade says the federal government needs to come out with actual criteria for this category. “Without the criteria, my thinking is they'd be stymied in trying to spend the additional $10 billion or so that they added specifically for trade infrastructure.”

The reality, Dade says, is the private sector already invests heavily in infrastructure, whether that be for expanding the Port of Vancouver or upgrading a rail shipping yard. “You need central government money to fund complementary infrastructure,” he explains. “If you're moving grain from Saskatchewan, then you've got to go all the way back to Saskatchewan or even to Brandon (Manitoba) to figure out the linkages to move it out.” Dade understands governments need time to figure things out and plan accordingly, but he'd like greater collaboration between government and the private sector to help decision-makers better understand production and supply chains and how these impact where governments need to invest in order to leverage private sector dollars.

Winnipeg, Manitoba deputy mayor Jenny Gerbasi, president of the Federation of Canadian Municipalities, says communities are already seeing new infrastructure activity. “Most budget 2016 housing investment (has) flowed efficiently, such as for repairs and retrofits to existing social housing. Others, such as the Affordable Rental Innovation Fund, have been much slower in flowing funds to proponents.” Clean Water and Wastewater Fund 2016 dollars have been almost fully allocated, with hundreds of individual projects announced in the last half-year. “Municipalities welcomed this short-term funding dedicated to water infrastructure projects and were ready with applications,” Gerbasi says. “In some cases the review process at the provincial/territorial level caused delays, but generally our members have found that this funding has flowed quickly.”

Gerbasi calls the 2016 budget's $20.1-billion transit plan “historic in both scale and mechanism” and says predictable, allocation-based funding directly to transit systems, with cost-sharing models that have federal and mid-tier governments sharing more than three-quarters of the costs “recognizes local fiscal limits and empowers cities to deliver outcomes.” She also pins hopes on a $2 billion, 11-year fund announced in the 2017 budget to support rural infrastructure. “FCM is requesting that the new rural and northern infrastructure fund support the local capital priorities of rural communities — including roads and bridges, septic system upgrades and the full range of transportation and mobility needs in rural areas,” Gerbasi says.

Calling for increased clarity on what access local governments will have to federal green infrastructure funding, Gerbasi says municipal governments need to be included in early discussions regarding the design of federal infrastructure funding programs. “Local governments are best placed to understand what investments are needed, and what will improve the quality of life for their residents. Turning these historic investments into historic outcomes will require the full partnership of all orders of government.”

SIGNUP FOR THE E-NEWSLETTER - View Past e-News Issues 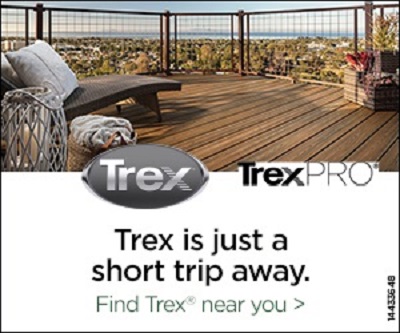 Save time and money with these digital tools for contractors We rely on our mobile devices to help us live more efficiently, so why not...

Impress your clients by turning their outdoor space into a sanctuary This is the second summer that most Canadians will be staycationing...

3 tips to strengthen your digital network In these uncertain times, it's more important than ever to stay in touch with your customers. We...